Once in a while we need to dream a little and think differently about how we use space so we thought this article might be helpful to that end!  The huge benefit of designing and then building something that is unique to how you live and work is that the building supports the desired end (whatever that may be) so much better than “standard” designs would ever due.  So dream big and let us help you build a path to your dream!

Taken from the April edition of Architectural Record magazine 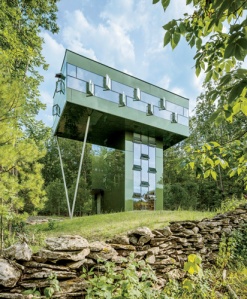 Architecture need not always be serious. And nowhere is lightheartedness more fitting than in a vacation house. One such playful example is the Tower House—a 2,500-square-foot structure on a sloping, wooded site in Ulster County, New York, about 100 miles north of Manhattan. Designed by New York City–based Gluck+ as the mountain retreat for one of the firm’s principals, Thomas Gluck; his wife, Anne Langston; and their two children, the house resembles a cross between a Modernist skyscraper and a tree house. It is completely glass-clad and has three bedrooms and adjoining baths stacked one on top of the other to support a living and dining room cantilevered 30 feet from the ground. A switchback stair, with bright-yellow treads and risers, connects all four levels and leads to a rooftop deck. The goal, says Gluck, was to create an aerie within the trees and take advantage of views of nearby Catskill Park, a vast state forest preserve.

Completed last summer, the house is the most recent structure built on the 19-acre parcel purchased more than 40 years ago by Peter Gluck, Thomas’s father and firm founder and principal (the practice was known until recently as Peter Gluck and Partners). The site contains an almost 200-year-old farmhouse and two other buildings the office designed—a guesthouse completed in 1995 (RECORD, April 1996) and a study space built in 2003 for the senior Gluck’s wife, Carol, a Japan scholar. 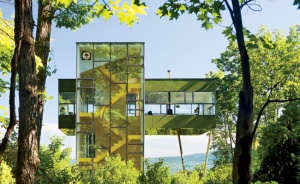 The Tower House sits on a small plateau above the rest of the property and relies on a combination of wood platform construction and steel. Covering the armature is a skin that includes olive-green fritted glass, as part of a rainscreen cladding system, and insulated vision glass. This slick envelope simultaneously emphasizes the structure as a man-made object and acts as camouflage, reflecting the house’s environs and altering its appearance over the course of a day, with the passage of seasons, and in changing atmospheric conditions. “We were trying to make a building about the experience of being in the woods without having the materials be natural,” explains Thomas Gluck.

The philosophy extends to the interior, where the selection of colors and finishes amplifies the feeling of a Platonic, rather than rustic, nest among the branches, especially in the 20-foot-wide by 40-foot-long main living area, with its ribbons of north- and south-facing windows. Here the wood floors are painted white, as are the gypsum-board walls and ceilings. These planar surfaces enclose what Gluck describes as “a pure volume of space lifted in the air.”

A tower in the woods might seem highly impractical, but the family is accustomed to hiking up many flights of stairs several times each day at their city home—a five-story walkup apartment in Manhattan’s Harlem neighborhood. Nevertheless, they have planned for a time when climbing the Tower House steps will be too arduous: concealed behind the drywall at each stair landing is a framed opening that should make it easier to add an elevator. Gluck envisions it as a freestanding tower connected to the house with bridges. 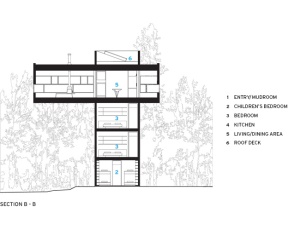 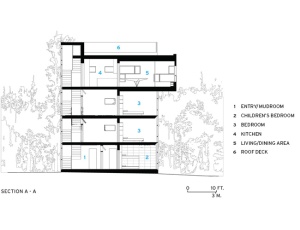 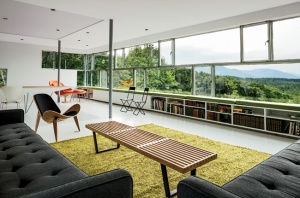 Despite the effort involved in transporting groceries from the car to the kitchen, the house’s configuration offers operational benefits, particularly in regard to energy conservation. According to its designers, the building uses only about a third of the energy consumed by a typical house of the same size in a similar climate. It has no air-conditioning but remains comfortable throughout the summer except in extreme heat, says Gluck. Tolerable conditions are maintained by exploiting the stack effect: the sun heats the air in the south-facing stair enclosure, creating a pressure differential that draws outdoor air into the house through gill-like casement and awning windows and then vents it through a roof hatch. At night, when there is no sun to induce this phenomenon, a fan at the top of the stairs assists ventilation.

The most significant savings, however, are realized by making it unnecessary to heat the entire house during the winter periods when the building is unoccupied. To prevent water pipes from freezing, a highly insulated 14-foot-by-13-foot core encloses the baths and the kitchen and includes substantial pocket doors. Before leaving at the end of a winter weekend, the owners slide the doors closed, set the temperature for the core to 50 degrees, and turn off the heat everywhere else.

This kind of careful consideration of energy use demonstrates that the Tower House is more than a mere folly—plenty of substance lies behind its whimsical exterior.

One response to “Chameleon Architecture”